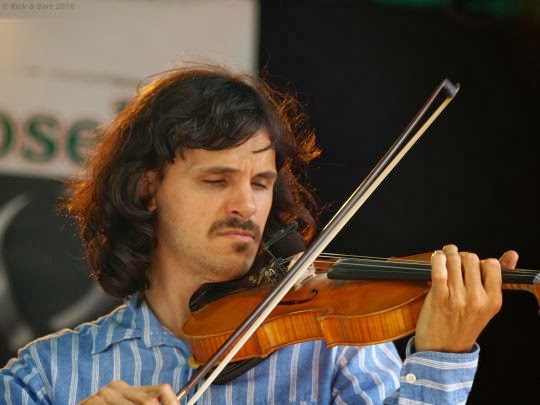 The “blind Belgian violinist” (London Jazz News)  played in as recently as 2013, but sadly I hadn’t ever heard of him then.

If I’ve understood the Dutch article in wikipedia correctly, Tcha was born in 1977 into a very musical family, and grew up playing first the guitar and then later the violin.  The London Jazz Review speaks of his “calling” to follow the Hungarian and Roma folk musical traditions, and youtube has a video of him playing beautiful Transylvanian folk music.

The web site dedicated to his music recounts how, having played in , he learned Hungarian in order to go back at age 23 and study there for 18 months.


If I’m right about his date of birth, Tcha is still only 37, and I look forward to seeing his fame grow.  You may like to join me in following him on facebook.
Posted by JenG at 14:37 No comments: 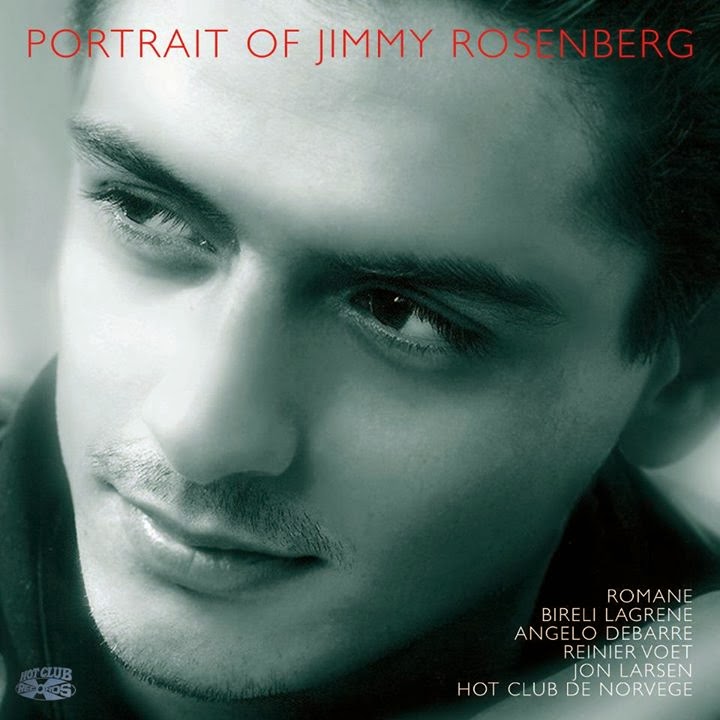 Jimmy Rosenberg is a talented Dutch guitarist from a Sinti/Roma background, who achieved international recognition while barely in his teens. There is a wonderfully warm and affectionate tribute by Jon Larsen on facebook, which could hardly be bettered.  Jon includes a link to a wonderful musical archive, which will interest jazz guitar buffs.

For my part, I found the youtube video of Jimmy at his first jazz festival, aged 12, very moving.

The next youtube clip shows a more mature musician, but he still can’t have been very old when it was filmed.  Clearly an astonishingly virtuoso performer.

"For more than a decade we were like brothers in arms, but now I can only hope for a miracle – that one day my little brother will return to planet Earth and continue his magic." 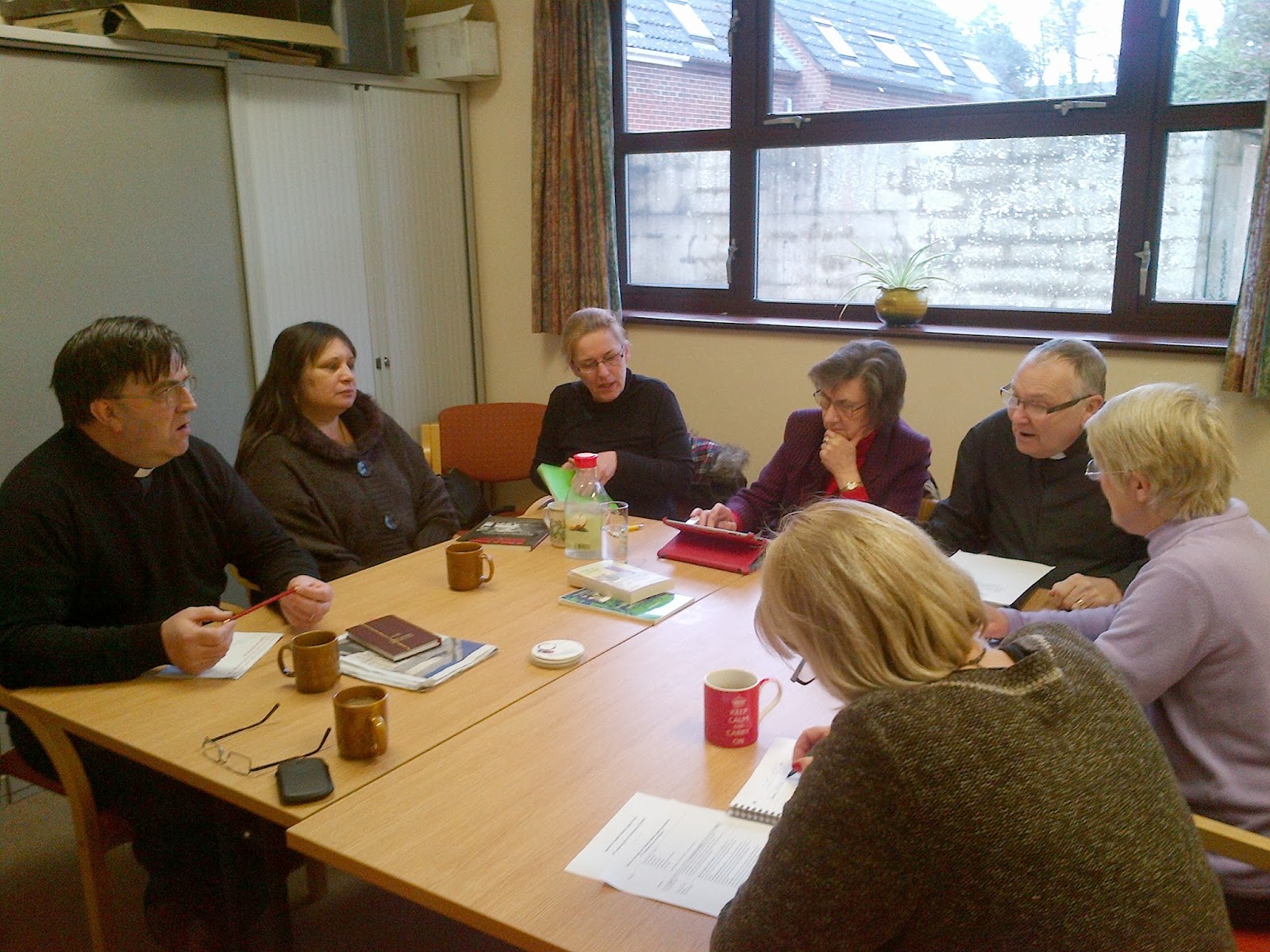 That's Adrian, the Chaplain, on the left in a dog collar.  He is Chaplain to Gypsies, Travellers and Showmen for the whole of the Diocese of Salisbury.  The picture shows him meeting with the group that supports him in this work.

Adrian's top concern at present is the education of Traveller children.  I've written before about how Traveller children underachieve in our school system as it is at present, but Adrian has identified a personalised teaching method that can be delivered either in school or by distance learning, and hopes to get it implemented locally.

Other concerns we discussed included the need for people travelling through our area in their seasonal nomadic journeys to have somewhere legal and safe to stop, where they will not be seen as a "problem" by anybody. The group is deeply unimpressed by the process currently going on to identify suitable sites, which is unlikely to conclude before the end of 2016 - and that's before anyone identifies funding or seeks planning permission!

I also want us to bear in mind the huge difficulties faced by Romani people in prison.  Not a great experience for anyone, I know, but to a Romani, being with his or her family is more than half of their personal identity, and they are lost without the culture they know - especially if they have lived nomadically - and especially if there are difficulties with communicating with family and/or with visiting. It is not possible to get figures from the Home Office for Gypsies in prison, because the Home Office stats don't have Romani as an ethnicity. So it is really important that we have a link with the prison service in some way, and can respond when there are difficulties.

The other problem that arises is that the Parole Board is very unwilling to allow people to be paroled to their family, and many Gypsy prisoners say they would rather serve their whole sentence than live in a parole hostel, which they perceive as being a hang-out for paedophiles and drug addicts. (Yes, that's how our culture looks to them!)

The good news we heard today is that Adrian has developed an excellent presentation for clergy in-service training or public talks.  We scanned a picture from "A Time to Travel?" which he plans to include in future.  It does a wonderful job of challenging the stereotype of the "New Age Traveller".  We see a young man with dreadlocks, wearing a jumper with the words "Special Brew", combat trousers and US Army surplus boots.  It is entitled "Is he a Traveller?" and is surrounded with words like Crusty, Drongo, Brew Crew, Dole Scrounger, New Ager, Hippy, and Cheesy Quaver.  Underneath, we read: "Actually it's Adam wearing a pullover his granny knitted him."
Posted by JenG at 15:10 No comments:

Although I belonged to my school’s jazz club and my town’s jazz club, I don’t think anyone ever introduced me to the music of Django Reinhardt.  I wonder how many other music lovers are in the same position?  For the sake of any poor souls with a similarly deficient education, here are the main facts about his life. 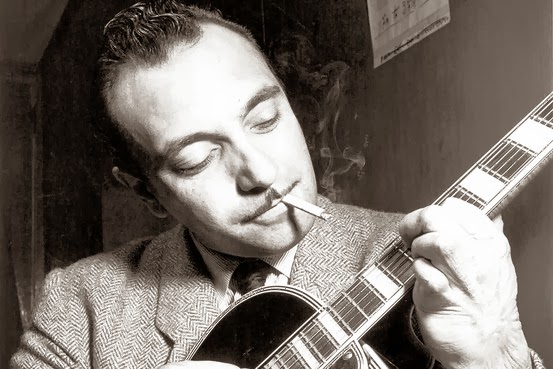 Django was born in 1910 at Liberchies in where a jazz festival now takes place in May every year in his honour.


As a “Minouche” (Romani or Sinti Gypsy) his early life was nomadic, but his family spent much time near , and he is often referred to as being a French Gypsy. His name, Django, means “I awake” in the Romani language.

Django played banjo, violin and guitar-banjo from an early age, and by the time he was 13, was able to earn his living as a musician.  It could have been a great tragedy for music that he was badly injured in an accidental fire in his caravan (“roulotte” (French) or “verdine” (Romani) )when he was 18.  His leg was so badly damaged that amputation was proposed, but Django refused to accept the operation, and painfully learned to walk again.  Even more challenging was the loss of the use of the third and fourth fingers of his left hand. By the age of 19, however, he had switched his musical allegiance to the guitar, and begun to develop a unique method and style of playing that became known as “hot jazz guitar”. A recording featuring “The Sheik of Araby”, “Limehouse Blues” and“After You’ve Gone” illustrates his extraordinary virtuosity. He was widely considered one of the greatest guitarists of all time.

Despite being in during World War 2, Django survived the holocaust, possibly because of covert admirers of jazz among the occupying Nazis.

In 1946, he toured , and was rapturously received. When he returned to , his personal appearances could be somewhat erratic, but his output of records was prolific – between 750 and 1,000 sides in his lifetime, of which the last album, “Djangology” was only released after his death. He died of a brain haemorrhage at in 1953.

The untitled melody in this youtube clip is a lovely testimony to his versatility as a guitarist.