Thanks to the wonders of the internet,  and specifically Twitter, I have been finding people who think like me and feel like me on issues I really care about. It's been much harder to convince the people I know who are still somewhat nervous about social networking via the internet to get online and get connected!

This week I was thrilled to discover some poems full of fire and passion by a Gypsy teenager. Another friend has found an interesting blog written by a Gypsy's wife, and I found one written by author Miriam Wakerly, whose books Gypsies Stop tHere and No Gypsies Served  I've already talked about.

I wanted to say that it felt like finding my karass but I know some of my dream team would definitely hate the idea that they are there to fulfill God's will.  BUT, ever since Kurt Vonnegut wrote about the idea in Cat's Cradle  I've been impressed by the idea that, somewhere in the world, there is a family more real than flesh and blood to which I somehow really belong.  I wonder if anyone else ever feels like that? 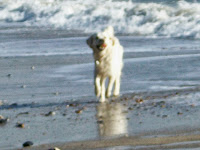 My dream team all hate injustice, despise prejudice, believe in treating people as individuals and never as stereotypes and are against anything that limits our rightful freedom to be ourselves and to express our identity and culture. (Dylan the dog is in it, of course - here he enjoys being himself at Sandbanks,)

If any of my flesh and blood family are reading this, most of you would definitely qualify to be in my dream team, not because of any accident of birth, but because of who you are.  OK?
Posted by JenG at 15:40 3 comments:

Last week the grass verge at a local road junction sprouted a wonderful crop of interesting wooden mushrooms.  They were the work of two sculptors who share a travelling life, each towing his own caravan, but stopping and displaying their wares together. Jim and Dave (not their real names) have been to the area before, but I hadn't stopped to speak to them, because I wasn't sure of my welcome.

"They're really nice boys," said Adrian, our Chaplain for Gypsies and Travellers, so I took my courage in both hands and bumped up the kerb onto the grass.

Jim was obviously busy in the gazebo that stood behind his caravan, outlining the shape of a new sculpture with a chainsaw, but stopped when he noticed me, and listened politely as I introduced myself. I explained that I wanted to represent the reality of Travellers' lives, and was happy to tell their stories, and this short story immediately came to his mind:

'We were in Sussex. It was about half past eight in the evening, and I'd been working hard all day.  I was still carrying on to finish off a piece of work, when somebody drove by, opened a car window and called out, "Get a job, you bum!"  I wonder what he thought I was doing?  I've got a job. Couldn't he see that?'

Possibly not, Jim.  It's hard to shift people from their preconceived ideas.

The sculptures seemed to be all about wildlife, with birds of prey figuring prominently. I was particularly drawn to a barn owl and an otter, and glad I'd stopped.
Posted by JenG at 06:31 No comments: 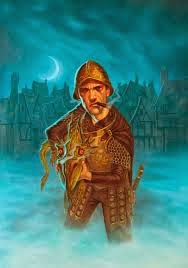 My favourite character in the Diskworld (after Granny Weatherwax, of course!) is Captain Sam Vimes of the Night Watch.  We first meet him in "Guards! Guards!"staggering slowly down the street in the grey light of a drizzly dawn and collapsing drunkenly into the gutter outside the Watch House.  Terry Pratchett uses this scandalous, lovable, irrational,courageous, stubborn,loyal, bigoted, idealistic character as a lever to open up the hard shell of our prejudices and enable us, alternately, to laugh at them or to recognise them as reprehensible. Even while we are disapproving of him, we cannot help acknowledging how like us he is.

For a start, his prejudices are much like ours.  You don't refer to dwarfs and trolls as "gritsuckers" and "rocks" because they are "fellow sapient races who have chosen to throw in their lots with the people of the city". In truth, as his men note, he doesn't like anyone much, which enables them to see his negative comments as a consistent characteristic of the man, rather than as any evidence  of bias. But vampires are a different matter, and so are aristocrats like Lord Rust.

In "Jingo" Pratchett makes one of his most sustained attacks on xenophobia, while being enormously entertaining and inventively funny. Vimes sets off to war, not in order to join in, but to arrest the combatants for breach of the peace.

"Snuff", written fourteen years later, is a much darker novel. The cynical Lord Vetinari, Vimes' boss and despotic ruler of Ankh Morpork, is found, uncharacteristically "awash with tears" as he contemplates the goblin race. "Vermin, Drumknott," he reflects aloud to his secretary, "an entire race reduced to vermin!"  Vimes being Vimes, he finds himself fighting for the lives of the goblin race simply because people like Lord Rust feel able to treat them as expendable vermin.  And Pratchett being Pratchett, he too is driven to show us why we should give our sympathies in this story to this apparently unlovely and unlovable race.

Within the story of "Snuff" itself, Vimes' most effective ally is his aristocratic wife Sybil.  Much as he deplores the aristocracy in general, Vimes cannot help admiring the way Sybil can use her breeding to good effect in support of truth, justice and other good things like a fry-up with black crunchy bits. When he introduces his wife to the wonderful music of goblin harpist Tears of the Mushroom, Lady Sybil doesn't take long to see a way to make acceptance of the goblin race not only possible, but fashionable.

It's hard to say how much the hugely popular Diskworld series has contributed to Britain's acceptance and celebration of itself as a multicultural society.  The controlled experiment of a Britain without any knowledge of the Diskworld doesn't exist.  The nearest analogues we can find, other European countries, or other anglophone countries, are probably not closely matched enough to be good comparators. But whenever I contemplate the relentless racism that faces nomadic peoples in this country, I am grateful that I can find the example of a consummate artist like Terry Pratchett who has consistently drawn attention to the facile stupidity of racism, and its sinister outcomes.