I'm very honoured to have Jake's permission to reproduce this:

The former home secretary's comments about Romany culture, and his claims we will cause riots, are ignorant and likely to fuel violence and prejudice 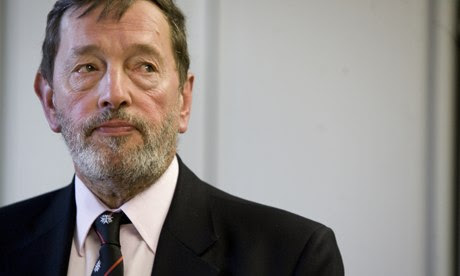 David Blunkett said the behaviour of Roma people in the Page Hall area of the Sheffield was 'aggravating' to local people. Photograph: Martin Argles for the Guardian
Ask any Romany woman who still reads palms and you will be told an essential fact – predicting a particular future makes it far more likely to happen. If you believe you are to meet a talk, dark, handsome stranger, then you are far more likely to find him.
However, it wasn't handsome strangers being predicted this week, but antisocial, ill-educated and dirty ones. When David Blunkett told BBC Radio Sheffield that the arrival of a large number of Slovak Roma migrants in his home city would lead to rioting, he wasn't so much predicting social conflict as adding to it. The behaviour of the Romany in the Page Hall area of the city, he said, was "aggravating" to local people. "We have got to change the behaviour and the culture of the incoming community, the Roma community, because there's going to be an explosion otherwise. We all know that." Among his charges was that we Roma don't want to educate our children, we congregate in large numbers on the streets, and we dump rubbish.
Romany individuals, of course, may well be guilty of littering and not sending their kids to school, but to suggest such behaviour is cultural is blatantly racist. From Gravesend to Glasgow I could take Blunkett to Roma migrant families who are fantastic neighbours, and parents who relish the chance to settle in a multicultural environment where they are no longer judged for being different.
Young men such as Artur Conka, for example, whose family escaped the grinding poverty of the Lunik IX ghetto in Slovakia, and who is fully integrating into British society. As a photography graduate he is using his skills to educate the British public about the plight of those he left behind – because he knows that every effort he makes to adapt must be matched by an effort to teach people about the community he comes from. Like every Roma migrant he attempts to disarm the fear evoked by the word Gypsy.
Such a fear of Gypsies is ancient and potent, but it has a name – Romaphobia. It recently led to blond Romany children across Europe being snatched and traumatised by state authorities. If politicians such as Blunkett make Romaphobia acceptable, it will indeed lead to racial violence in British cities. As January 2014 approaches and the anti-immigration lobby warns of the arrival of millions from Romania and Bulgaria, it's essential that progressive politicians – and I'm assuming Blunkett considers himself one – understand why 200,000 Roma migrants have already fled poverty, persecution and discrimination to live in the relative comfort of British cities. I'm sure Blunkett campaigned to end South African apartheid, but does he understand the social apartheid that blights millions of Roma across eastern Europe? 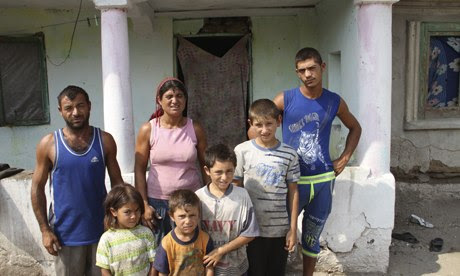 Ion Beldimari and his family. Photograph: Jake Bowers
Ion Beldimari lives in the ragged settlement of Smardioasa in southern Romania. He and his wife and five children live in a two-room mud hovel with no windows or doors. "We live in dread of winter because we have so little shelter," he told me when I visited in September. The family goes hungry if Ion and his eldest son cannot find enough scrap metal or plastic bottles to fill their horse-drawn cart. Like millions of Roma across Europe, they don't so much dump rubbish as recycle it to survive.
Then there's the myth that we don't like to educate our kids. Nothing could be further from the truth. Most Roma migrants I've met come to Britain precisely because they want their children to integrate, and not be forced into special schools where they are deemed "educationally subnormal". In the Czech Republic, for example, 35% of all children in special schools are Romany, perhaps 10 times the proportion in the overall population.
So as politicians churn out old prejudices about my community, I hope for just one thing – understanding. Because the thing we lack most of all isn't education, housing or even employment, it's the rarest commodity of all – empathy. And until media and politicians truly understand what we are attempting to escape, Romaphobia will continue to blight lives.
Posted by JenG at 11:26 No comments: 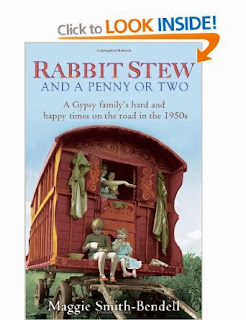 I recently read "Rabbit Stew and a Penny or Two" by Maggie Smith-Bendell, at just about the same time that a Greek couple were being accused of abducting a child, and Irish police removed another fair-haired child from a Traveller family on suspicion that she too was abducted.  Two headlines, from opposite ends of Europe, that occupied a lot of media attention for days on end.

The fact that the true stories, as originally explained to the police by both these families, bore no relation whatsoever to the false accusations received very little coverage in comparison, and the fact that nomadic people everywhere have for centuries lived in dread of the state removing their children from them received no mention whatsoever that I saw.

An early part of Maggie's book reminded me of this truth, however - the very reverse of the impression that was then being conveyed by the media. Maggie's parents were thrown into a total panic by the news that a farmer and his wife would like to adopt their son, and immediately fled the farm, where they had hoped to overwinter, leaving behind some treasured possessions that they could ill afford to do without, including their precious "banties". In this particular case, the family eventually learned that the farmer and his wife had no power to take their son from them.  But the state always has had that power, and still uses it on occasion. A nomadic family is then completely vulnerable, and may have no resources to put their opposing case forward, nor to ensure appropriate care for their lost child.

The point I want to make, is that this is how a lie works.  The evil that we do, we attribute to the victim.  We widely publicise our allegations.  And then we let the story die away.  The victim's innocence may be proven later, but nothing can un-write the headlines that have fed the evil myth.
Posted by JenG at 13:44 No comments: