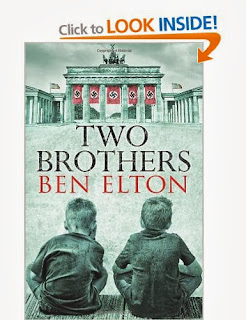 It's always a happy day when I see that a new Ben Elton book has come out.  The latest, "Two Brothers" was no exception. In a year when the Borders Agency has stopped people in the street and at train stations because they looked as if they might be illegal immigrants, the Home Office has toured its own special hate campaign around on huge posters and the police have abused the powers given them by search warrants to harass, rob and humiliate an elderly Romani activist and his wife and others, it told such an instructive story.

We find ourselves in 1920s Berlin, and as the story unfolds, we see how the gathering horror that was Nazi Germany and its holocaust begins to take shape. The hounding and persecution of Jews begins with hate speech, progresses through spiteful and petty indignities and rises to a crescendo of agonisingly brutal bullying. Ben Elton writes with such immediacy and detail that the reader cannot doubt that he has meticulously researched his story.

By the end of the novel, we don't need to be told that many children like the two brothers of the title did not survive the Nazi era. The holocaust hangs over the scene all too tangibly.
http://www.amazon.co.uk/Two-Brothers-Ben-Elton/dp/0552775312/ref=sr_1_1?s=books&ie=UTF8&qid=1380231967&sr=1-1&keywords=ben+elton+two+brothers

I put this book down more determined than ever to say, at every opportunity, "This must not happen here!" But I also felt a dreadful sense of foreboding, because it seemed to me that we are already in the beginning stages of a process that is heading in the same direction.  I wonder how many of us will mark Holocaust Memorial Day on 27th January next year, and stand up to say, "Never Again"?

It has always seemed to me that the English believe it couldn't happen here.  I have always known it could. We may point to the successful assimilation of Jews into British life, but dig a little deeper, whether into history or into current affairs, and you will quickly see that murderous prejudice targets other, more vulnerable groups as well. The holocaust engulfed several groups of people who can all too easily become targets for random acts of violence as well as hate campaigns.  People with learning disabilities, for example, were used to test the efficiency of the Zyklon-B gas eventually used in the gas chambers. Homosexuals were also targeted, and so were Roma and Sinti Gypsies, who died in unknown numbers, possibly as many as half a million, in a forgotten and hidden genocide.

I say "hidden," because many of the state-sponsored murders were carried out without leaving written records. Men, women and children were simply rounded up, taken into the forests, made to dig graves, and then shot and buried. But state records do exist for some 200 Roma and Sinti children who were gassed at Auschwitz-Birkenau.  The Buchenwald Railway project exists to preserve and honour their memory. http://www.dw.de/buchenwald-memorial-gives-names-to-sinti-and-roma-victims/a-16965403.  The German web site, "gedenksteine buchenwaldbahn" lets you enter any of the names you see on the memorial stones, and to find a brief biography of the child named. Most horribly, this story consists of bare details gleaned from official Nazi records, which have no humanity about them at all.  If you don't read German, you can just click on a tab to get an English translation. http://gedenksteine-buchenwaldbahn.de/630/

"Why do we want to remember these horrible things?" says a colleague of mine, who resists any remembrance of the holocaust. It's because we need to remind ourselves to say, "Never again!" loud and clear in our own time and our own country - before it's too late.

Who do you believe you are? 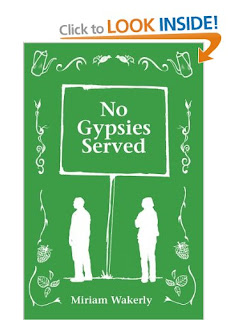 Miriam Wakerly's "No Gypsies Served" begins with a chillingly real situation following on from the campaign for a Gypsy site that we read about in "Gypsies Stop tHere". The heroine receives a threatening anonymous letter that seems to be linked to her advocacy for the Gypsies.  This has actually happened to someone I know and have worked with,  so I was instantly hooked on the story!
http://www.amazon.co.uk/No-Gypsies-Served-Miriam-Wakerly/dp/0955843219/ref=sr_1_1?s=books&ie=UTF8&qid=1379370380&sr=1-1&keywords=No+Gypsies+Served

The other totally believable storyline is about the importance that Romany Gypsies attach to their identity as Romanies.  If you saw Countryfile yesterday, you will have seen this illustrated in real life.  A Romany living a "settled" life was interviewed as he walked with his horse in front of a traditional wagon or "vardo", which he takes out on the droves every summer, to allow his children to see the traditional Gypsy way of life.  His children were in the vardo, obviously enjoying every minute of their lovely nostalgic trip, and when he asked his little girl "What are you, Gypsy or Gorgie?" her reply was immediate: "Gypsy!"
http://www.bbc.co.uk/iplayer/episode/b03bjlb4/Countryfile_Dorset/

In "No Gypsies Served"  the hero, Dunstan, is trying to come to terms with the feeling that he has betrayed his family by staying away from them, and living a settled life, even if it is in a mobile home.  As he delves into his memories of his early life, we are aware of how strong the bonds are that bind the Romany community together, and how important that identity is to every Gypsy.  This understanding leaves us deeply concerned for the heroine, who has unwittingly caused great offence by implying that Dunstan is no longer a Gypsy. I always say that you will never find a truer friend that a Romany Gypsy who has come to trust you.  But equally, you will find it very hard to regain trust if you have caused offence!

Like the father interviewed in Countryfile, Miriam Wakerly is keenly aware of the pain of a whole community whose valued way of life has almost completely disappeared, and paints a vivid picture of its joys and hardships. As Dunstan attends the funeral of his old friend Copper, the chilling facts of the injustices that persist for the Gypsy community haunt the story. Roma, Gypsy and Traveller communities experience the worst health outcomes of all communities in the UK, and have a life expectancy 10 years lower than the average. And the "No Gypsies served" scenario still happens in our country to this day.

As Copper's funeral was described, I had a vivid memory of standing outside my local parish church and watching white-faced, black-clad groups of grieving Gypsies arriving for a funeral, and feeling overwhelmed by the depth of the loss they felt.

So although this is a work of fiction, the research and the genuine empathy which went into its writing make it a really moving experience.  Like Gypsies Stop tHere, it deserves the widest possible audience.

“ needs affirmative action plan, says Jesse Jackson” according, that is, to the Guardian headline on Friday 6th September.

Today, Hugh Muir asks (also in the Guardian) where is ’s Jesse Jackson?
http://www.theguardian.com/world/2013/sep/08/where-is-britains-jesse-jackson
Where indeed?!

I was sorry and ashamed that the church I attended allowed Racial Justice Sunday to pass without doing anything to raise awareness of the injustices in our supposedly egalitarian and tolerant society.  Injustices like these:

–        Roma and Gypsy and Traveller communities experiencing the worst health outcomes of all communities in the , and a life expectancy 10 years lower than the average

–        Roma, Gypsy and Traveller pupils continuing to be the most at risk of under-achievement in our education system

Nor did the leader of the service use her sermon (on Paul’s epistle to Philemon) to point out that Christianity can and should put us in a new and radically different relationship with people at the bottom of the social pile.

Nobody gave thanks for the beautiful and wonderful diversity of our society.


So let me say, I am glad to share my lovely homeland with the Romani people, with Irish Travellers and with Showmen. I recognise their contribution to our culture, their amazing history, their stubborn resilience and their enormous gift for helping us simply to enjoy life – if only we let them draw up alongside us, and share our space for a while!
Posted by JenG at 15:23 No comments:

Art as an agent of social change

I watched the end of Hollyoaks today, and was confirmed in my view that art does contribute to the climate in which attitudes and social conditions can change.  In the closing seconds,just before 7 o'clock, a man declared his love for another man Not many years ago, this would have been unthinkable on prime time TV.

I would acknowledge that TV is a very powerful medium, because it has much greater penetration than, for example, printed books.  But I'm still a book person.  I like something I can turn to at will, and don't have to wait for, can carry anywhere, and enjoy anywhere.  So I'm hoping there are still enough readers out there to create a powerful block of public opinion through reading, sharing and discussing Miriam Wakerly's book, Gypsies Stop tHere. 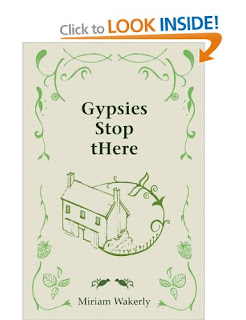 We are introduced to the Gypsies' history and current situation gradually, through the eyes of the non-Gypsy heroine, which was a good strategy. It gave us someone like us to identify with, at a point in the story where we might possibly have resisted identifying with a Gypsy heroine. I was greatly impressed by the realism that Miriam brought to the description of the local reaction to the expected arrival of a group of nomadic Gypsies.

Yet at the same time, she resisted to urge to become heatedly polemical, continuing to present her story through the eyes of a thoughtful and fair-minded heroine, who engaged our sympathy. I was also gripped by the heroine's own very strong story.  When this was brought together with the plight of a young Gypsy mother fleeing domestic violence with two small children in tow, I was taking the book with me wherever I went, because I was so keen to know how it all worked out.

The Gypsy mother and her hot-headed, angry husband are never less than human and clearly drawn characters.  The reader gains in confidence that Miriam has not set out idealise her characters, but to present them as clearly and truthfully as possible in the context of a well worked-out plot.

I would say that the happy ending came a bit too quickly and easily for realism, but now that I've read the sequel, I know this wouldn't be fair.  I hope lots of people will read Gypsies Stop tHere and begin to see our Gypsy visitors as real human beings, rather than as romantic stereotypes or dreadful bogeymen.

For geeks like me who love such things, there was even a helpful glossary of Romani words at the end.  I couldn't wait to turn to No Gypsies Served!

"When you can, say something." - we change the word a little bit at a time.

Still looking for ways to change the world, and I promise I will write about a great book tomorrow.  But for today, here is someone doing her bit to change "tolerance" to "acceptance",
http://www.upworthy.com/watch-a-lesbian-attack-the-word-gay?c=ufb1 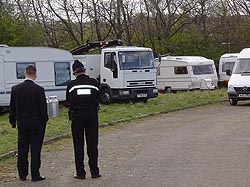 Oh, how I wish we were even at tolerance for Travelling people! But we're not, are we?  Have a look at this picture.  What does it say to you?
The web page it came from is a wonderful example of a Council being both as negative as it dares about Travellers - to stay within the Race Relations Act, and to appeal to the prejudices of its voters - and as positive as it dares to be about Travellers' rights, so that it can explain any small modicum of humanity in the way Travellers are treated.  There is not one word of any reason why local people might be glad to see Travellers spending some time in their locality.  Can you just imagine how they would be pilloried if they said any such thing? http://www.gateshead.gov.uk/Housing/helpsupportadvice/GypsiesandTravellers/Unauthorised.aspx

But equally, can you imagine the outcry if any other ethnic group were treated with such open hatred and prejudice?