A beautifully written story about a Somerset Gypsy girl's life 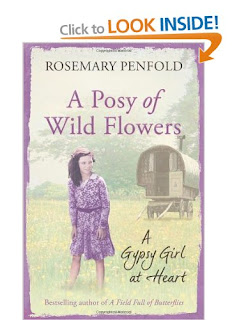 I thoroughly enjoyed Rosemary Penfold's story. I related easily to Rosemary's love of the natural world, which echoes the almost mystical reverence which Tom Odley has for it. As a gaujo, I couldn't say how typical or realistic her account of a Gypsy childhood was, but as soon as she started to write about her experiences as a home help, I recognised the richly comic, tragic and interesting stories as typical of older people in the rural south west, and was completely gripped!

Sadly, I don't think this book is very likely to change anybody's attitude, as anyone unsympathetic towards Gypsies is probably unlikely to read it.

Nevertheless, it will be a rich mine of  statements correcting common misconceptions and prejudices.  Rosemary has a lovely, pithy, common-sense way of expressing her rebuttals of such ideas.
Posted by JenG at 15:56 No comments:

How do the attitudes of a whole society change?

I've been thinking this week about what the key factors may have been in the change of attitudes that the and the have seen towards African Americans and Black people. Even more startling for the speed with which it has happened has been the change from criminal activity to legalised marriage that has been brought about for the lesbian and gay community. (I'm not writing “LGBT” because I'm not so sure that any change in attitudes is really discernable for transgendered and bisexual people.)

We tend to think in terms of powerful personalities who have made an impact politically, such as William Wilberforce and Martin Luther King, but I believe this is probably because of the way we tell stories to ourselves.  Outstanding individuals become symbols for a whole complex  maelstrom of currents and counter-currents in society, and without in any way wanting to diminish their towering achievements, I have wanted to consider what else has been involved.

It seems to me – and anyone is welcome to disagree – that the key is to achieve communication across different and even opposing parts of society, so that a particular viewpoint becomes common currency, even if not everyone agrees with it.  There are all sorts of ways, major and minor that this has been achieved by and for Black people and homosexual and gay people, but I have come to think that artists of all kinds are key communicators.

A Google search on “attitudes to homosexuality” led me fairly quickly to an article suggesting that the 1961 film “Victim”  starring Dirk Bogarde and Sylvia Sims had significantly shifted attitudes. http://www.historytoday.com/andrew-roberts/shifting-attitudes-homosexuality
I also seem to remember an early storyline in Eastenders that presented a homosexual couple very sympathetically. Try looking at all the images for “Gay pride” on Google images, and you will see that humour allied to imaginative visual artistry can also be very compelling. The Swedes can take credit for any smiles this picture brings. The road is outside the Russian Embassy in Stockholm: 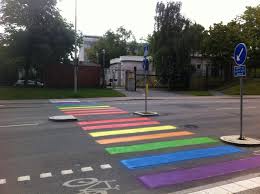 As far as Gypsies and Travellers are concerned, there has not to my knowledge been any work of art with a comparable impact ( unless you count the dreadful Channel 4 series, “My Big Fat Gypsy Wedding”, of which they should be thoroughly ashamed).  Travellers remain the minority about whom one of my colleagues wrote,” no other race would be subject to such unconcealed discrimination and loathing.”  In fact, attitudes to Gypsies and Travellers always make me think of that insightful Bertrand Russell quote:
“Few people can be happy unless they hate some other person, nation, or creed.” So how can people be given a good feeling about changing a negative attitude that has seemingly performed a useful function for them? Can we help them to identify with a hero who has a different attitude, or even with a victim of their hatred who can be shown to deserve their respect?

Hopeful that there may be an answer, or at least he beginnings of one, I’ve asked Amazon to send me all the Miriam Wakerly books I could find, and one by Rosemary Penfold that Amazon identified as a result of my request.  Watch this space, and I’ll let you know if I’ve found the beginning of a revolution in attitudes. http://www.amazon.co.uk/s/ref=nb_sb_noss_1?url=search-alias%3Dstripbooks&field-keywords=Miriam%20Wakerly

And remember, it really matters.  A Romany friend recently despaired, saying on facebook, “travellers will never be accepted by gaugis.”  Could you live with feeling like the whole of our society was rejecting you?  And because of who you are, not because of what you do!

Some say it was a thousand years ago that a group of people from the Indian sub-continent began a westward trek that took them eventually across almost the whole of Europe, and into in about 1500. http://www.bbc.co.uk/kent/voices/romany_roots.shtml

On their long journey, they encountered enslavement, forced labour, and attempted extermination by he Nazis.
http://www.opensocietyfoundations.org/voices/gypsies-roma-travellers-animated-history

Attitudes towards the Romany and other Traveller people in this country remain at best ambivalent or stereotyped and at worst unashamedly racist. An example of the most extreme racism, which absolutely refuses to see the Romany person as a human being with feelings, family and a point of view is the Dorset reaction to the annual migration through Bournemouth, Poole and much of rural of groups of Travellers following traditional patterns of migration in search of work.

On the 10th August, the headline in the local press read, “We are doing all we can to stop illegal camps, say councils”, and the leader of Bournemouth Council was quoted as saying, “Our strict safeguarding, inhospitable attitude and better defences should help residents feel reassured that we are doing absolutely everything we can to ensure they are inconvenienced as little as possible.”

If this degree of hatred and intolerance were directed at any other group in society, it would be widely seen as intolerable, and there might even be prosecutions under equality laws.  As far as I could see, nobody except the Traveller community group  Kushti Bok pointed out that, if there were no legal sites, Travellers were bound to end up on illegal encampments.  Or is this too logical for politicians pandering to racist hysteria in the press?

The apparent good news that a temporary camp has been set up is soon revealed, in the same story, as simply a ploy to give the police powers they otherwise wouldn’t have.
http://www.thisisdorset.net/news/10601351.Calls_for_new_temporary_traveller_site/?ref=ar

All credit to Jenny Awford, who took the trouble to interview the Kushti Bok director, one 66-year-old Romany woman and the chief officer of Dorset Race Equality Council. Jenny’s headline was “Councils have “completely failed us”, say travellers.

Where are the human rights groups, arguing for everyone’s right to have somewhere to sleep?

And, most shameful of all, where are the churches standing alongside the rejected outsider in compassionate solidarity? And where are the Christians pointing out that every single human being is of infinite value, because we’re all made in God’s image?

Education and does it have to be in school?

I am very honoured to have David Bowen's permission to share his further explanation (below) about why new rules are so disadvantaging Traveller families.

There are two pressing problems facing Travellers: land and education.  Steps are being taken, via the Diocese and Local Authorities, to address the former.  The latter is also acute.

Since April, when the Government introduced new rules about registering attendance at school, Travellers have been inconvenienced, possibly quite seriously.  Under the old rules, a family that Travelled for work, so including show families as well as others, could get permission for their children's absence from school during the travelling time.  Schools were expected to (and sometimes did)  provide suitable work for the children during their absences.  Now, under the new rules, all absence counts towards the school's success in OfSTED inspections.  If attendance falls below 95% the school will not achieve success under the inspection regime, no matter the cause of the absence. To make matters worse, headteachers may no longer approve absence for Travellers (or anyone).  Thus schools will be very tempted to take children off the school roll for the period when they are travelling.  This means that children may get lost, that parents become totally responsible for the education of their children without the help of the school, and that there may not be a place available when the family returns to its base.  All this is bad.

Show families are particularly worried about these
new arrangements.  However, they have serious implications for all Traveller families.  Nothing seems to be being done about it.

Marx (Karl not Groucho) said that before attempting to change things it was essential to raise awareness.  That seems to me absolutely right.  I we are going to get a better deal for Traveller children in the education world, it is first necessary to get those who hold the purse strings and who make the policy to realise that there is a serious problem.

There are a whole range of possible answers (and probably far more than we have thought of) from establishing a "virtual free school" to providing books and a syllabus to parents.  Some might be very radical, but all should be considered.

Let's dream a dream.  Let's imagine children and parents being consulted on how they wanted education to be provided. Let's imagine governments of all complexions giving utmost priority to pupils at risk of not achieving their full potential. Let's imagine every child being launched into adulthood with all the skills they need to achieve their dreams.  Are you really going to tell me this isn't possible in the twenty-first century? Isn't it more likely that there are vested interests that don't want it to happen? Jenny
Posted by JenG at 15:56 No comments: