REDEFINING TRAVELLERS OUT OF EXISTENCE 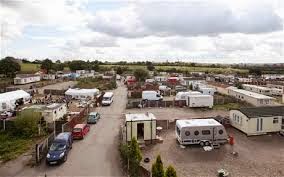 The Government's proposed Planning Policy Guidance published on 14th September 2014 deals with planning policy for Traveller sites.  If you thought it was already extremely difficult to gain planning permission for a Traveller site, these proposals limit even further the circumstances in which permission might be granted.

Most contentious of all is the proposal that nobody can claim to be a Gypsy or Traveller unless they are currently leading a travelling lifestyle. The following are extracts from a briefing paper prepared by Chris Johnson of the Travellers Advice Team and Dr Simon Ruston, Planning Consultant

In a bad season, a nomad’s temptation to stray from his path is irresistible; but the army is waiting for him with sub-machine guns.  ‘The Army’, said my friend, the old khan, ‘has now replaced the lion and the wolf’.

In our current context we might want to replace the word ‘Army’ with the word ‘Government’.

Quoted in the Sunday Times on 14 September 2014 (when the consultation paper was published) Andrew George MP, the Chair of the All Party Parliamentary Group on Gypsy Roma Travellers stated that the Government “can’t redefine travellers out of existence.”

This paper is not intended as a formal response to the consultation paper but as a means of pushing around ideas and information in the process of working out how Gypsies, Travellers and their supporters and representatives are going to respond to these disastrous proposals.  In many ways these proposals seem designed to make it impossible for Gypsies and Travellers to obtain planning permission for sites anywhere in .

Bizarrely the Government accepts that the problem of unauthorised encampments and unauthorised developments is created by the lack of adequate pitches and adequate stopping places.  It is useful to have reference to the history of site provision since the Caravan Sites and Control of Development Act 1960 closed the commons to Gypsies and Travellers and began the process of the closing up of traditional stopping places.  (...) Since the Coalition Government came to power, the following law and policy have had a significant impact on the Gypsy and Traveller community:

-          The Localism Act 2011 amongst other measure curtailed the ability to apply for retrospective planning and revoked the regional strategies that had previously contained pitch targets
-          The Legal Aid, Sentencing andPunishment of Offenders Act (LASPOA) 2012 and subsequent legal aid changes and cuts have had serious implications on the provision of legal aid
-          Planning Policy for Traveller Sites (PPTS) in March 2012 changed the national planning policy and withdrew Circular 01/06
-          The 2005 Temporary Stop Notice (TSN) regulations have been withdrawn meaning that a TSN can be issued for caravans that are a Gypsy’s or Traveller’s home. Failure to comply can mean a fine of up to £20,000
-          Since June 2013 all Gypsy and Traveller planning appeals in the Green Belt have been recovered for decision by the Secretary of State for Communities and Local Government (SSCLG).

These provisions of law and policy have already had a significant detrimental impact on the Gypsy and Traveller community. However, the latest proposals will have even more serious detrimental implications. The Government have presented Gypsies and Travellers who continue to live in caravans with a Catch 22 scenario.  If you travel, you will be hounded from pillar to post.  If you decide that you cannot possibly keep up with this travelling due to the impossibility of the situation and you settle down, you will be told that you should travel.  Our conclusion is that what the Government are really seeking is not integration but assimilation.  They are seeking to drive Gypsies and Travellers into housing and, indeed, the restrictive policies applied by this Government and the failure of this Government to ensure that there is adequate site provision has already led to large numbers of Gypsies and Travellers (much against their will in many cases) moving into bricks and mortar accommodation.

This amounts to a destruction of a way of life by the back door.

It will be important to have a look at the statistics that the Government are quoting.  At Appendix 2, we attach the historical count of Gypsy/Traveller caravans.  It will be seen that, since 2000, in general, the numbers on unauthorised sites (covering both unauthorised developments and unauthorised encampments) has been dropping.  Numbers certainly have not been rising despite the propaganda put out by this Government.

The Government like to paint a picture of a system where the planning system is, in their strange view of things, slanted in favour of Gypsies and Travellers.  In fact, the history mentioned above indicates that it has become more and more difficult for Gypsies and Travellers to obtain authorised sites and the system has not enabled them to do so (obviously we except the situation with regard to the provision of local authority sites between 1970 – when the Caravan Sites Act 1968 duty came into force - and 1994).  In fact, when housing development is required, it is often the case that this is either allowed in the Green Belt or the Green Belt boundary is re-drawn to allow this to occur.  At Appendix 3 we have a paper on the subject of Housing and the Green Belt from the Campaign to Protect Rural England (CPRE).  This paper shows that national planning guidance is allowing developers to bypass local democracy and gain planning permission for large housing developments in the countryside.  Therefore it would appear that the discrimination in the planning system is against rather than in favour of Gypsies and Travellers in terms of attempting to get sites in the countryside.

In the Introduction at para 1.2 the Department for Communities and Local Government (DCLG) state:-

Our policy is clear that local authorities are responsible for objectively assessing their own site needs and identifying a suitable 5-year supply of sites to meet their needs, as is consistent with national planning policy as a whole.

However it is abundantly clear that this will not happen without some active, central oversight and central involvement.

The Government propose that the planning definition of ‘travellers’ (as they insist on describing them) should be amended to remove the words “or permanently” to limit it to those who have a nomadic habit of life.  They further propose that the definition for the purposes of accommodation needs assessment should be identical to this new proposed definition.
(...)
Bizarrely the government recognises the implications of this policy in the Equalities Statement which accompanies the consultation: